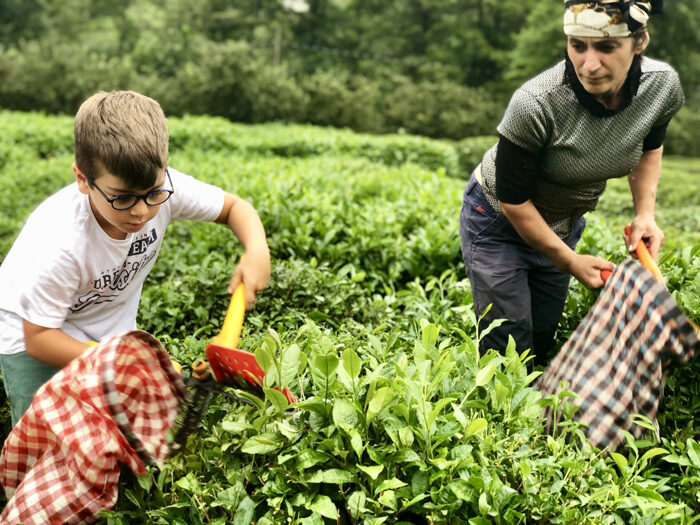 Let’s make things clear before we begin. When I say ‘Turkish tea’ (Çay), pronounced as chai, I refer to the black tea that is predominantly produced in the Eastern Black Sea of Turkey, specifically Rize.

There are other types of herbal teas sold or consumed under the name of ‘Turkish tea’ such as apple tea (elmaçayı), rosehip tea (kuşburnuçayı) and linden flower tea (ıhlamurçayı). Another one that is popular in the Mediterranean coasts of turkey is sage tea (adaçayı). These herbal teas and others are used for treatment of different ailments. You can find them at ‘aktar’ herb shops alongside other herbs and dried leaves.

No Turkish breakfast is complete without tea. Visits from friends and family must also be accompanied by tea. We drink it in the morning, afternoon, evening or night. Any time is a good time for a nicely brewed tea. You are offered tea when you are shopping, when you are at the bank or post office. It is a sign of friendship and hospitality.

We grow tea on the luscious mountains of Rize, Trabzon, Artvin and beyond. We grow them near our houses or in plantations away from the main house. It is a very important part of our economy and social life.

The history of Turkish tea

The first time tea passed through Turkish land was around 1500 as part of the Silk Road trade. However, it did not become a part of our lives until 1900.  Turkey has a long history of coffee drinking, but tea took the crown after World War I. After the war, coffee became too expensive and less accessible for the common household. It wastea’s turn to shine as we could grow it domestically.  With encouragement from the founder of the Turkish Republic, Atatürk, we began to replace coffee with tea.

How is Turkish Tea produced?

Rize in the Black Sea Region of Turkey had the most suitable climate and soil for tea growing so we started growing our own tea and our first tea plantation was set up in 1924. 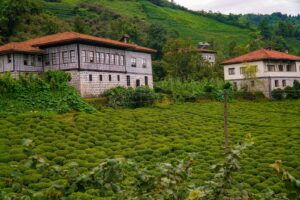 Currently, we are one of the top five tea-growing countries, and according to a report in 2015, we consume the biggest amount of tea per person in the world.

Here is a video that shows every step your tea goes through before being poured into your cup.

As the proud exclusive tour provider of the region, we take you through these steps in person when you join one of our tours of the Black Sea Region of Turkey.

How to brew the perfect Turkish tea

For the traditional brew, you need something called ‘Çaydanlık’, which is basically two stacked kettles – a big one at the bottom and the smaller one on top of it. These days, you can see machines designed for this purpose in lots of households.

Zerrin from ‘Give A Recipe’ has explained this process perfectly:

Hot tip: NEVER put the small kettle straight on to the stove top directly as this will spoil the taste and make your tea bitter. If you are preparing for more people, just add more tea leaves in the small kettle at the beginning.

How to serve and drink Turkish tea

Turkish tea is generally served in tulip shaped small glasses with a small saucer at the bottom. 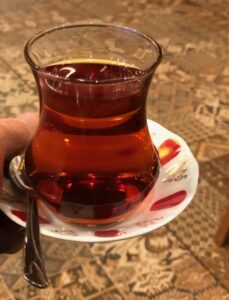 The top part of your kettle has the very strong tea ‘dem’ and you can decide how much to add into the glass, depending on how weak or strong you prefer your tea.Then you add the boiling water to dilute it. If you like it strong (koyu in Turkish) add more ‘dem’, if you prefer it weak (acik in Turkish), add less ‘dem’.  If you prefer it somewhere in between – we call that ‘tavşan kanı’ which literally translates to ‘rabbit blood’ because of the reddish brown colour – fill about ¼ of the cup with‘dem’ and top it up with boiling water.

Use a little sieve while pouring the ‘dem’ to keep the tea leaves out of your cup.  Some kettles actually have built-in sieves so you can look out for these types.

Turkish tea is taken without milk. Some people prefer sugar in it, and we give a tiny teaspoon to stir so you don’t spill the tea. Turkish tea is served very hot, so hold it from the brim to not burn your fingers.  Most Turkish people drink several cups in one sitting, so don’t be hesitant to ask for more!

We look forward to sharing all these steps with you and more about the culture and customs of the region when you join one of our tours to the Black Sea of Turkey.If weather permits, you can have a go at harvesting Turkish tea too.Just let us know what you are after and we will make it happen.